Last Thursday the new Tejano Monument was unveiled on the Texas State Capitol Grounds. Mounted on top of a huge granite slab are eleven life-size bronze statues, honoring the early Spanish and Mexican settlers in Texas: a Spanish explorer, a vaquero (cowboy), two longhorns, and a pioneer family. Five bronze plaques trace the history of Tejanos from the early 1500s through the 20th century.

Many events celebrating Tejano history were held in Austin last week. I could not attend Thursday’s ceremony, but I did watch the Nosotros Los Tejanos parade on Saturday morning. This parade was one of the best that I’ve seen since moving to downtown Austin, with high marks in the following categories:

Most Enthusiastic Cheering for a Monument Sculptor (Armando Hinojosa)

Most Educational Signage on Floats

Most Descendants of Famous Tejanos 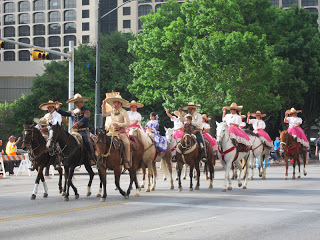 Most Horses and Riders