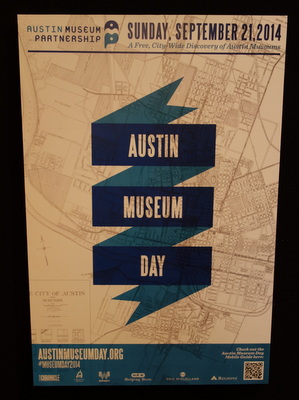 Austin Museum Day provides a good excuse to visit museums and historical locations around town. Admission fees are waived, and there’s a handy map to find everything. It’s always fun to check out new places or to revisit old favorites. 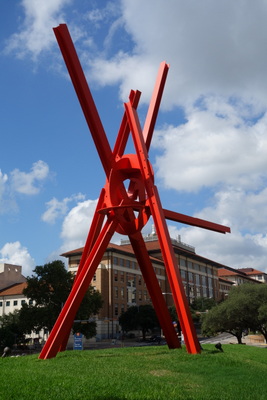 This year I started with a tour led by Landmarks, the public art program for the University of Texas. The Landmarks director explained that many of the pieces are on loan from the Metropolitan Museum of Art in New York City. It seems that MMOA has more art than they can possibly display and so they provide loaners to various institutions.

Our tour started in front of the Main Library with a discussion of Square Tilt by Joel Perlman. Outside the Engineering complex, we admired the red Clock Knot by Mark di Suvero. We stepped inside the Circle of Towers by Sol LeWitt, situated in front of the Gates Computer Science building. We ended at The Color Inside, a meditation space created by James Turrell on the roof of the Student Activity Center. Landmarks gives public tours on the first Sunday of each month and has a podcast for a self-guided tour.

My next stop was the Neill-Cochran House Museum in West Campus. This is one of three remaining homes designed by Abner H. Cook (the others are the Texas Governors Mansion and the Pease Mansion). The house was built in 1855 and was used as hospital during the Civil War. The Neill family purchased the property in 1876 and sold it to the Cochrans in the 1890s.

The house is now owned by The National Society of the Colonial Dames of America in The State of Texas. The first floor is decorated as it might have looked when the Neills lived there. I was privileged to have a tour of the second floor with Mary Cochran. Now in her eighties, she grew up in this house. She is very glad to see the upstairs decorated again with her family’s furniture and belongings. 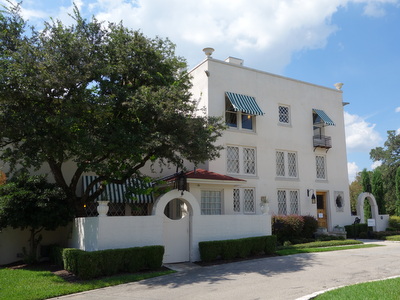 Since it was a lovely day, I drove out to The Contemporary Austin at Laguna Gloria. I hadn’t been to this property at the end of 35th Street for many years. I took so many photographs that I’m going to save them for a separate blog entry.

My final stop was the Austin History Center on Guadalupe and Eighth. I’d been there before, but wanted to see the their new exhibit, Backwards in High Heels: Getting Women Elected 1842-1990. The title comes from a quote about Fred Astaire and Ginger Rogers: “Sure he was great, but don’t forget Ginger Rogers did everything he did backwards…and in high heels!” This exhibit examined the lives of well-known Texas women, such as Barbara Jordan and Ann Richards. But it also included interesting displays about local women:

Next year’s Austin Museum Day is Sunday, September 20, 2015…and it’s already marked on my calendar!

© Austin Downtown Diary, 2014. Unauthorized use and/or duplication of this material without express and written permission from this blog’s author and/or owner is strictly prohibited. Excerpts and links may be used, provided that full and clear credit is given to Austin Downtown Diary with appropriate and specific direction to the original content.