The 2013 Austin Food & Wine Festival, sponsored by Food & Wine magazine, was held at Butler Park during the last weekend of April. The festival was moved to the grassy area next to the Palmer Events Center due to the poor condition of last year’s location, Auditorium Shores. Saturday’s festival hours were 10 AM – 4 PM, with shorter 11 AM – 3 PM hours on Sunday. The weekend weather was comfortable, with highs in the 70s.

Huge tents were set up around Butler Park for cooking demos and wine/beer seminars. Smaller tents were erected for book signings and festival merchandise. One corner of the park was reserved for hands-on grilling sessions. In the center of everything was The Fire Pit, with plenty of slow-cooked meat being tended there throughout the weekend.

After Friday’s food overload at Taste of Texas, I had declared that I was too full to eat anything else all weekend. Well, that resolution was quickly abandoned once the Grand Tasting Pavilion opened at noon on Saturday. This huge tent complex at the far end of the park featured samples from over 30 local food artisans and over 50 beverage vendors. 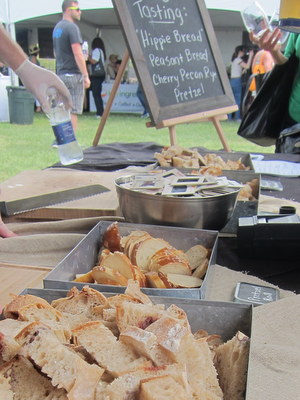 My favorite tasting on Saturday was the Pretzel Bread from East Austin’s Flour Bakery, combining the best aspects of both bread and pretzel.

On Sunday, I really loved the apple cinnamon bread pudding from Bastrop Brewhouse.

I was enthralled with the food tastings, but the main focus of the festival was really the celebrity chef demo sessions. Here’s some of the sessions that I attended:

Los Angeles chef Susan Feniger demonstrated some interesting, easy-to-prepare foods in her session, “Entertaining Around the World.” She was introduced by friend and fellow Top Chef Master, Tony Mantuano who did a demo on Sunday.

Marcus Samuellson was interviewed at Friday’s Food Republic Interview Lounge so I knew more about him than the other chefs. He showed ways to use all of a chicken, including the skin, in his session, “Sexy Leftovers.”

Graham Elliott from the show MasterChef was simultaneously cooking up a storm and doing stand-up comedy. His most memorable quote was that the trend in his cooking now is “farm to table to stomach to couch.”

Chef Tony Mantuano demonstrated how to make a “Party From The Pantry.” He is chef/owner of Italian restaurant Spiaggia in Chicago. Afterwards, I asked his wife Cathy about what she had been making over on the side, and she explained how to make hors d’oeuvres using H-E-B Roasted Whole Piquillo Peppers. These may show up at my next party.

Even though I’m neither a food nor a wine connoisseur, I still enjoyed the weekend very much. The speakers were entertaining, informative and accessible. My only complaint was that regular badge holders like me could not get into the hands-on grilling sessions because there were a limited number of spots and the more-expensive Savor badge holders were given priority access. But otherwise the Austin Food and Wine Festival was a memorable weekend…and definitely a delicious one.