The Fairmont Austin is now open on the corner of Red River and Cesar Chavez, about two blocks from I-35. This 37-story building has 1048 guest rooms and suites. Bill and I stayed here during South by Southwest. The hotel had only been open a week, and finishing touches were still being done.

The hotel’s driveway and lobby entrance are on the north side of the building, away from busy Cesar Chavez. The lobby has soaring ceilings with lots of seating, trees, and artwork. There’s been some criticism of the blue color scheme, but I liked it.

The first floor’s focal point is a huge meeting space with a bar called Fulton. Comfortable seating areas are scattered around a tree adorned with blue and green lights. During SXSW, musicians were often performing on the small stage set against the wall.

This space is stunning at night. You can see the tree’s lights shining through the windows when walking on Red River. This would be a nice place to meet friends after a show or to get away from the rowdy crowds on Sixth Street or Rainey Street.

Also located on the first floor, the Revue food hall is divided into raw bar, Italian, Asian, and dessert seating areas. We did not eat there, but the hostess explained that, since any menu item can be ordered from any table, it doesn’t really matter where you sit. Somewhere in back of this food hall is a grill house restaurant called Garrison (maybe through those green doors?). We did not eat there either. I didn’t even know about this place until fact-checking this blog entry, so perhaps it wasn’t open then.

The Fairmont also has a coffee shop on the first floor. We thought about getting a mid-afternoon snack there, but the beverages and pastries (mostly chocolate concoctions) were fancy…and pricey.

The hotel’s seventh floor has a large south-facing pool with lots of seating plus another bar. I think their spa is also on this level. Bill and I were able to look all around, but workers were still painting and planting. Nothing was open yet.

A skywalk from the Fairmont’s second floor leads directly to the back doors of the Austin Convention Center. At first, the open-mesh walls felt a little scary. But the skywalk seemed well-built and sturdy, so we often took this convenient short-cut to attend our SXSW sessions.

We also attended some SXSW sessions on floors 2-4 of the Fairmont. Their conference rooms and ballrooms were typical huge hotel spaces. The carpet was covered with the names of Austin landmarks. Unfortunately, these place names were then covered with ugly purple-and-green botanical designs. Good design gone bad. 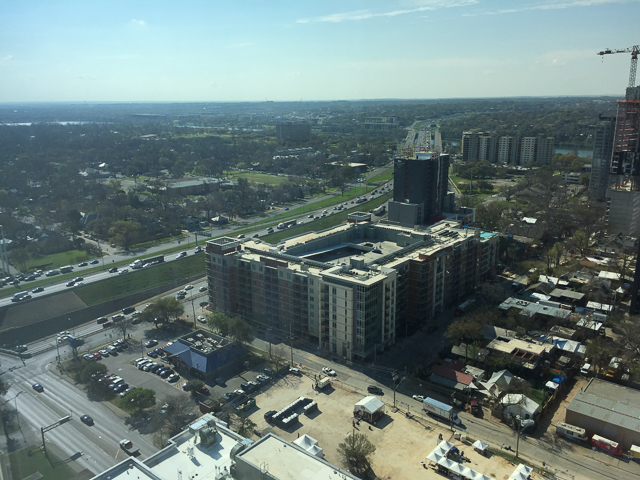 Our spacious hotel room on the 26th floor faced south, with an impressive view overlooking I-35 and Rainey Street. Watching I-35 traffic can be strangely calming when you are not driving through it. We had worried about nighttime traffic and music noise, but the windows were thick and we slept soundly.

Would we stay at the Fairmont Austin again? Most definitely!

© Austin Downtown Diary, 2018. Unauthorized use and/or duplication of this material without express and written permission from this blog’s author and/or owner is strictly prohibited. Excerpts and links may be used, provided that full and clear credit is given to Austin Downtown Diary with appropriate and specific direction to the original content.