The new South Terminal is now open at the Austin-Bergstrom International Airport. As its name suggests, this building is on the southern side of the airport’s expansive property. South Terminal cannot be accessed directly from the main airport entrance on Rt. 71. Instead, you must take Rt. 183 south (of the Rt. 71 intersection), turn left onto Burleson Road, and then make another left onto Emma Browning Avenue. This route wasn’t well-marked when I traveled, but perhaps better signage has been installed now. A shuttle bus runs between the two terminals, but there’s plenty of inexpensive parking at South Terminal (maximum: $7 per day). The parking lot does not have an attendant, so only credit cards are accepted at the exit. 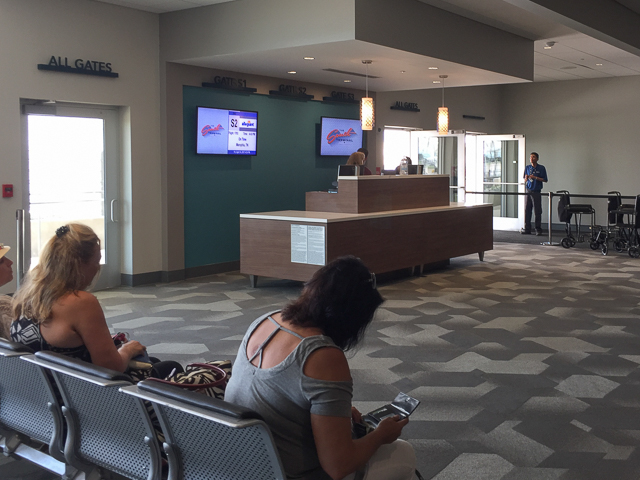 Currently, Allegiant Air is the only airline using the South Terminal. Only one TSA line was open on my departure day, but the queue moved quickly. There was no separate TSA PreCheck line. Two flights were scheduled to leave around the same time, but the terminal seemed to have a sufficient amount of seating and restrooms for everyone. However, I think the place might become crowded when other airlines start to use the building. Flight delays could cause problems, too.

South Terminal press releases said that food trucks would be available, but only one (Stacked Sliders) was parked outside in the courtyard. The inside waiting area also has a small snack bar. This no-frills terminal does not have covered jetways, but I had no problem getting myself plus my carry-on bag up the ramp and into the plane. I heard that the airline staff hand out gigantic golf umbrellas if it’s raining. Fortunately, the weather was pleasant on both my departure and arrival days. 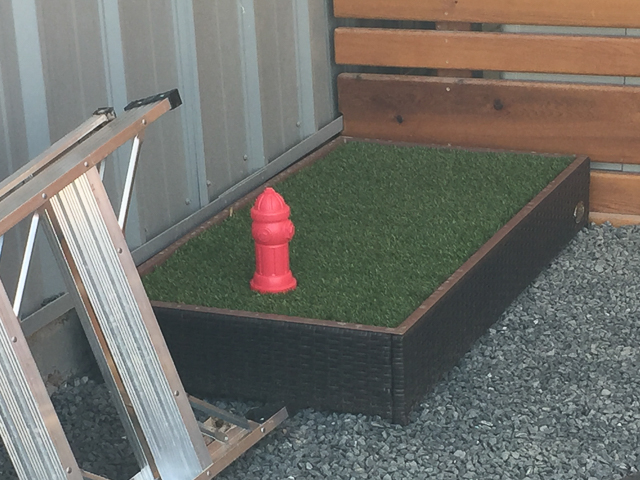 A tiny pet-relief area is hidden in one corner of the outdoor courtyard. Do only tiny dogs travel on planes these days?

© Austin Downtown Diary, 2017. Unauthorized use and/or duplication of this material without express and written permission from this blog’s author and/or owner is strictly prohibited. Excerpts and links may be used, provided that full and clear credit is given to Austin Downtown Diary with appropriate and specific direction to the original content.