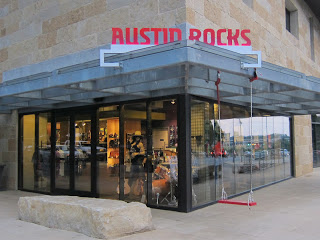 Red swings are visiting our downtown neighborhood.
The Red Swing Project is “a public art initiative in which red swings are placed in public spaces anonymously to inspire playfulness everywhere.” This unique project started in Austin back in 2007 and since then over 150 red swings have been placed in the US and India.
Two red swings were installed at Austin City Hall as part of Art City Austin a few weeks ago. One is still there, just outside Wild About Music‘s latest storefront, Austin Rocks TX (an unusual store name, but I agree with it on several levels). The other swing is now outside the Austin Children’s Museum, just across the street from our apartment. I have been surreptitiously using this swing at times when the streets are relatively deserted.
I’ll be sad when these are taken down later this month, for riding a swing is “the pleasantest thing”!

The Swing
How do you like to go up in a swing,
Up in the air so blue?
Oh, I do think it the pleasantest thing
Ever a child can do!
Up in the air and over the wall,
Till I can see so wide,
River and trees and cattle and all
Over the countryside–
Till I look down on the garden green,
Down on the roof so brown–
Up in the air I go flying again,
Up in the air and down!
Robert Louis Stevenson