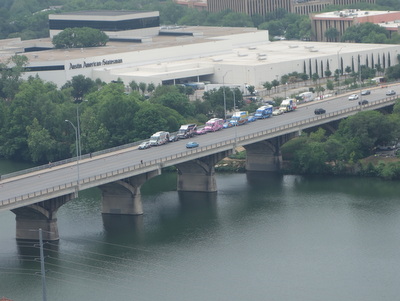 Now that the Austin episode has aired, I can finally tell you about when The Great Food Truck Race was in town. This story starts on a Friday morning back in May, when I noticed an unusual assortment of vehicles parked on the Congress Avenue Bridge. I snapped a picture and promptly went back to whatever I was doing.

The next evening I noticed a camera crew in front of an unfamiliar food truck called Let There Be Bacon. Click. Another photo. 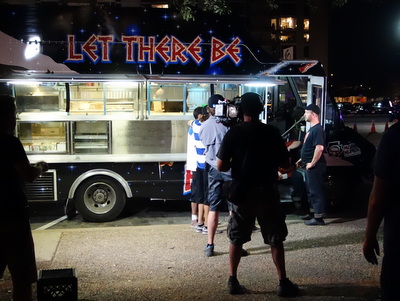 An astute friend figured out that The Great Food Truck Race must be filming in Austin that weekend. I had never heard of this Food Network show, but now that I have watched exactly one episode, I will tell you all about it. Each season, eight novice teams come up with a concept and are provided with a food truck. They drive to different cities to prepare and sell their food, encountering Speed Bumps (challenges) along the way. The team with the lowest earnings is eliminated from the contest at the end of each episode. The final winners receive a cash prize and are allowed to keep their truck.

Six of eight original teams were still competing when the show arrived in Austin. “Teamwork” was the episode’s theme, so the six trucks were split into three pairings. On Saturday, I saw two trucks near the The Gelato World Tour at Republic Square Park and two more at the corner of Fifth and Rio Grande. (I didn’t see the other two who were parked on South Congress.) During the Speed Bump, the pairs had to switch trucks for a few hours. The show’s biggest conflict was when the Fifth/Rio Grande trucks realized they had chosen a terrible location and moved to the park on Sunday. The trucks that had already claimed that location were angry, but everything was eventually smoothed over. 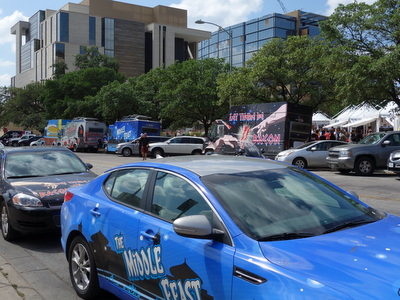 I wish that I could end this post with a report on the truck food or a story about meeting host Tyler Florence. But I wasn’t very interested in the show because I was busy eating copious amounts of gelato that weekend. However, I’ll continue to follow this season’s progress…

© Austin Downtown Diary, 2014. Unauthorized use and/or duplication of this material without express and written permission from this blog’s author and/or owner is strictly prohibited. Excerpts and links may be used, provided that full and clear credit is given to Austin Downtown Diary with appropriate and specific direction to the original content.