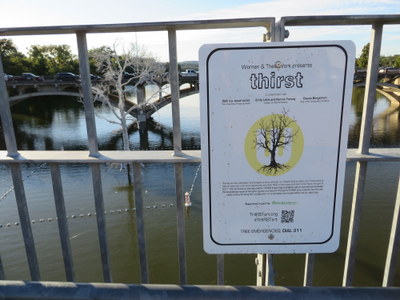 An ambitious outdoor art exhibit called THIRST was recently installed in and around Lady Bird Lake. This temporary installation was commissioned by Women & Their Work and funded by a grant from the Robert Rauschenberg Foundation. THIRST “encourages an exchange of ideas about the impact that a scarcity of water will have on Austin, on Texas, and beyond, as well as memorializes the loss of 300 million trees that died in the recent Texas drought.”

The centerpiece of the exhibit is a 35-foot white tree rising up from the center of the lake between the Lamar Street and Pfluger Pedestrian bridges. This “ghost tree” is illuminated at night and positioned in the lake so that it doesn’t interfere with rowing lanes. 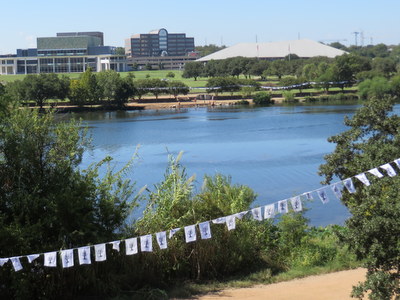 THIRST also includes over 14,000 “prayer flags” which are strung around the lake between the Pfluger Pedestrian and First Street bridges. An image of a dead tree similar to the ghost tree is silk-screened on each white fabric flag.

Rows of flags are also strung between the ramps leading up to the pedestrian bridge. The flags flutter in the breeze and create a kind of see-through ceiling above the Hike-and-Bike Trail. 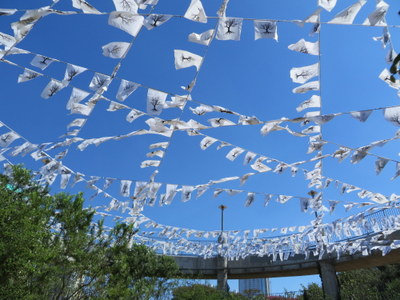 THIRST was intended to provoke thought and discussion about the local water situation, and so I wondered if the exhibit would survive last week’s heavy rainstorms. While some debris washed up around the ghost tree, nothing was damaged. Most of the prayer flags are still flying, although a few of the connecting strings are sagging towards the ground. THIRST seems to have withstood the elements so far, so let’s hope that central Texas  gets even more rain before the exhibit is removed in early December.